Chile- Argentina conflict
Conflict over the Falkland Islands
At the headquater of the UN
At the international forum
World Days of the Prayers for Peace
> Publikacje JP2online> Dialog, tolerancja...> Struggle for peace
Drag timeline

Kampania Jana Pawła II przeciwko wojnie w Iraku.
John Paul II during his pontificate held over 1000 official and unofficial meetings with heads of state and prime ministers. He was a consistent advocate of peace and reconciliation. Here are some of the papal interventions on the international forum.

In 1978, a conflict arose between two Catholic countries over the right to islands lying in the Beagle Channel area. Military operations have already been planned. John Paul II joined the mediation by sending Cardinal Antonio Samorè to the conflict area. The cardinal's diplomatic mission was successful. Both countries officially asked the Holy See for mediation in the conflict. An agreement was finally signed that put an end to the danger of war. It is worth noting that the last time the Holy See acted as an international mediator took place 100 years earlier.

Conflict over the Falkland Islands

An equally difficult diplomatic challenge was the pilgrimage to Great Britain in 1982. Two months before it began, the Argentine army occupied the British Falkland Islands. In response, the British navy set out to take over the islands. At this point, a dilemma arose whether the Pope should visit a country at war. The British insisted, and Argentina thought it would be synonymous with the Pope's support for Great Britain. At that time, John Paul II invited British and Argentine bishops to Rome, discussed the situation together, celebrated a public mass for peace and reconciliation, and announced that after visiting the British Isles he would also visit Argentina. And so it happened. After visiting Great Britain, the Pope arrived in Argentina, when it was already known that this country would lose this war. For the Argentines, the Pope's visit was a consolation in a situation of military defeat.
John Paul II and all Vatican diplomacy were also actively involved in restoring peace in the Balkans when the war in Kosovo broke out in 1998. Interventions were manifested through international activities, the mission of the papal envoy or material assistance. 84 The Pope also called the faithful - in this case and during other conflicts - to pray for peace. However, world leaders have not always followed the advice of John Paul II. In 2003, the Pope strove to stop the international coalition led by the United States and Great Britain preparing to attack Iraq in order to overthrow the regime of Saddam Hussein. He sent his representatives to Iraq and Washington, and publicly called for the cessation of hostilities. The war that broke out then led to long-lasting tremendous effects, visible to this day.

At the headquater of the UN

The Pope presented a new perspective on peace issues when he addressed the UN on 2 October 1979.

At the international forum

John Paul II expressed his opinions on important topics in places where decisions of global importance are made. Already in 1979 during a trip to the USA he gave a speech at the UN in New York. In addition, he spoke at the headquarters of the European institutions. The most important speeches of the Pope at the headquarters of international organizations were held in:
- United Nations, New York (USA)
October 2, 1979. The speech concerned human rights, including religious freedom. The Pope referred to the situation in countries where there is a lack of civil liberties, despite the signing of international conventions (these are the countries behind the Iron Curtain).
October 5, 1995. The Pope referred to changes taking place in the world, including the bloodless revolution of 1989; he spoke about the rights of nations and human beings, about freedom and culture. He referred to the speech presented by representatives of the Krakow Academy with Paweł Włodkowic at the forefront
during the Council of Constance in 1415 defending at the beginning of the 15th century the rights of nations to existence and autonomy. He emphasized the following issues ...
- UNESCO (United Nations Organization for Education, Science and Culture), Paris, June 2, 1980. The Pope's speech concerned broadly understood culture. The Pope referred to the experience of Poland, saying ... He ended the speech with the following words ...
- European Parliament, Council of Europe, Court of Human Rights - during a trip to France on October 8-11, 1988, John Paul II visited the European institutions based in Strasbourg: European Council, European Parliament and Court of Human Rights. In the European Parliament he spoke about the prospect of extending the European Community to the East.

World Days of the Prayers for Peace

John Paul II was concerned about world peace. 1986 was designated by the UN International Year of Peace. The Holy Father also called for fervent prayer for this intention and announced the convening of an inter-religious prayer meeting for this intention in Assisi. 47 delegations representing Christian churches and communities and 13 delegations representing non-Christian religions responded to the Holy Father's invitation.

The meeting took place in Assisi - the city of St. Francis - October 27, 1986. In the closing speech, the Pope pointed out that "peace depends above all on this Power, called God, which - as Christians believe - manifested itself in Christ. That is the meaning of this World Prayer Day."

The following days of prayer for peace were announced by the Pope on the following days:
It is worth noting that every year the International Day of Prayer for Peace is celebrated in the world. It is an initiative of an ecumenical organization - the World Council of Churches. This "spirit of Assisi", to which the Holy Father returned many times, almost to his last days, later found many followers. The fruit of this "Assisi I" are - organized every year from 1987 to the present day by the Roman Community of Saint Giles - meetings within the series "People and Religions". Japanese Buddhists on the holy mountain Hiei were also organizing interreligious meetings for peace, and in Poland similar initiatives are being undertaken. 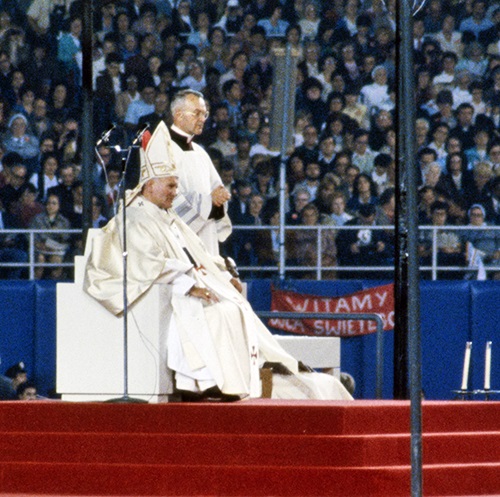